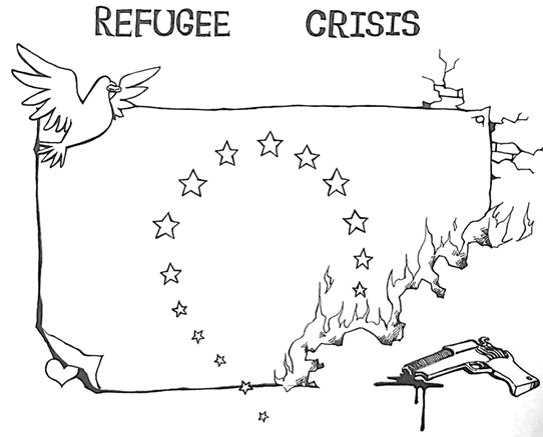 Abstract: In January of 2016, 20 students from eight different countries at the TU Bergakademie Freiberg applied the long-term planning method of Scenario Planning to the question of how Europe could successfully manage large-scale and long-term migration from predominantly Muslim countries. The analysis yielded four different futures and pointed out eighteen strategies for success. The most promising of them include strengthening the European economy and building a clear and shared European identity among all.

Our world is becoming a smaller place day by day. People are migrating to new places all across the world. This is due in part to globalization. Others hope to simply find a better life, while ever more people seek refuge from armed conflicts. In 2015, Europe experienced an extraordinarily large migration of people. Refugees in heretofore unheard of numbers fled the wars and strife in in the Middle East. With this large-scale change, the interested and concerned public turns to Europe’s policy makers:

“How does the EU realize the most beneficial outcome of diversification through migration by strengthening security, harmony and prosperity for all in a sustainable way?”

To address this question, a team of MBA students[1] took up the issue at the TU Bergakademie Freiberg under the supervision of the fourth author. They applied the Scenario Planning methodology[2] to identify what different kind of futures, i.e. scenarios, might await Europe, and what strategies of success might be called for.

Since 2014, the EU has undergone an unprecedented development. In 2015, up to 1.3 million refugees primarily from Muslim countries sought a more peaceful life in Europe[3]. This has created a great deal of problems due to the fact that the EU has never faced such big inflow of people before. European countries now face a number of challenging questions. Below are some of them:

A New Approach with a long-term perspective

In developments where even the short term trends are chaotic enough, is it even possible to think beyond today and take a long term view? Is it possible to look one, three or five years ahead? Might it even be possible to explore what the EU may look like a whole generation ahead? The answer to these questions is a wholehearted yes.

The approach most appropriate for such uncertainty and the one chosen for this study was that of Scenario Planning. This methodology was originally conceived of as strategic planning tool by the U.S. Armed Forces during the Second World War. In the business world, it was first adopted in the 1960s – and subsequently kept secret for many years – by the Shell Oil Corporation that used it to great competitive advantage. Since the 1990s, Scenario Planning has come to be one of the preferred methods of long term planning in industry and organizations worldwide. A quick glance at the popular YouTube channel shows that even some of the world’s best known and respected universities have made Scenario Planning a key part of their business studies curricula.

In January 2016, a team of twenty MBA students from eight different countries at the TU Freiberg applied Scenario Planning to explore different possible futures that could await Europe with continued large scale Muslim migration well into the year 2040. The team was asked to take the perspective of consultants to the EU commission.

They began by looking at the many diverse and potentially relevant trends already visible today. Often, the trends driving the future are already visible in the present, but are not recognized for their relevance to the long term future.

The student team identified 23 different trends that could be relevant in the year 2040. The two most critical ones were, first, a rising Islamophobia, i.e. a strong worry about Islam accompanied by a growing trend towards Caliphatism by those who pursue a political version of Islam in Europe. The second critical trend was the risk of a failing economy, accompanied by growing societal discord within Europe. Each of these trends could strengthen or weaken. Thus, a two-by-two field analysis of these trends yielded four different scenarios.

In a way, this scenario represents Murphy’s Law: anything that can go wrong has gone wrong. In 2040, the European economy is very weak. There is a high degree of islamophobia combined with rising Caliphatism within society. This combination leads to disharmony in society and high crime rates. The European Union is struggling to keep the economy from disaster. There is polarization among the EU nations. Initiatives by individual countries to leave the EU have taken place.

This scenario represents the best possible future with a beautiful picture of life in Europe. In 2040, virtually everyone is well integrated in society and the economy is booming. New jobs and a better life for ever more people are part of the benefits of a well-integrated continent. People of different ethnicity, religion and race have learned to live together with peace and harmony.

In this scenario, the economy is strong. In 2040, there are a lot of jobs and a good standard of living for everyone. Yet there is a worrying social discord due to high Islamophobia/Caliphatism. The inflow of refugees under the circumstances has been a mixed blessing. One the one hand, it helps the economy. On the other, it adds to social disharmony due to growing Islamophobia/Caliphatism.

In 2040, virtually everyone respects the many religions being worshipped across Europe, including of course the secular perspectives, i.e. people without any religious affiliations. Unfortunately, there is economically caused disharmony in society. It stems from the long-term weakening economies across Europe. As a result, unemployment rates are unacceptably high along with increasing crime rates. In this situation, the large inflow of refugees puts extra burdens on the economies as well as the public spending for social support services.

What should the EU commission do to make the best of long term migration in these different scenarios?

These different strategies could be grouped into six different clusters. The following list shows both the clusters as well as the individual strategies. The most important groups are the first two. Whatever Europe might want to consider, it is critical to strengthen the European economy. It is the foundation for a peaceful and constructive life. When people have a chance to find their own happiness through their own economic safety and self-realization through work, they are also willing to be open to new initiatives and ideas.

On the other hand, when a sizable number of Europeans are worried about their economic future and afraid that they might lose meaningful employment, strife and political discord is likely to arise even through minor societal disturbances.

The second emphasis has to do with strengthening the European identity, both for those who were born here as well as for the many newcomers. A shared understanding of identity can be fostered through policies – or ignored through inaction.

These are the recommended strategies for the EU policy makers.

a – Strengthening the European economy for integrating migrants into society:

·         Introduce programs for highly-skilled immigrants to help them enter the labor market as soon as possible.

b –Education/acculturation to strengthen EU identity and its commitment to unity in diversity:

c – Strengthening the institution of the European Union:

e – Say no to Caliphatism:

The Scenario Planning study made clear that the EU should do everything to avoid the scenario of “Mission Impossible” and to further the scenario “It’s a Beautiful Life” instead. The student team strongly felt that the key success factors were to promote the EU identity through education and to strengthen the EU economy.

The scenario-derived strategies will benefit the EU economy as more talented and experienced refugees will find gainful employment here and contribute to Europe’s global competitiveness.

Strengthening the common EU identity is one of the major areas that could help the EU find and make explicit its shared core values. At present, there are easily thirty different European identities. What holds them all together? The United States defines its own culture and identity explicitly. Europe should do that as well. Building a strong European identity is an important step towards political union.

Be they indigenous or immigrant, especially educating the young generations about the EU identity will advance the EU vision to build an attractive society for all.

In the view of the team, it is crucial that the EU helps all newcomers to understand, respect and appreciate EU culture, customs, laws etc. Their successful societal inclusion in society depends on it. By the same token, Europeans will benefit from more inter-cultural orientation and appreciation.

Every crisis contains the elements of risk and opportunity. The student team was convinced that with the outlined strategies the risks to the EU can be contained and the opportunities taken advantage of in optimal ways. A beautiful life is Europe’s to have – if it works smart for it.

The Team of Students:

[2] See the suggested readings for the scenario planning methodology.

[3] The precise numbers are still unclear as of Spring 2016. The sudden inflow in the Fall of 2015 exceeded the administrations’ abilities in Germany to keep accurate counts.